On Wednesday, September 7th, I had an appointment with my midwife, hoping that maybe something would be going on and I could get a sweep, but nope, my cervix was closed and there was no sign of baby.

We reviewed my ultrasound dates and found September 9th to be the actual due date and not the 4th after all.  She had it confused and I was relieved because I wasn’t feeling quite mentally and physically ready for him to arrive yet, though everyone was hoping and asking if he was here yet. I felt so stressed out about it because I didn’t feel overdue yet.

Thursday was our pay day and our planned day to do our grocery shopping in the city. I was hoping that he would hold off on coming until after we got that done and I figured he would/should come on his due date or a bit late. I got Autumn to do a 40 week belly picture for a memory, and I’m glad that I did. 🙂

Craig decided that instead of wait for him to come and continuing on night shift, never knowing when he would come, that he would just work Thursday night and take his holidays so we wouldn’t have to stress about if he would be rested enough to drive to the city and be there for me during labor.

I also have had all of my labors take place during the day time, with all of my kids being born in the evening. Autumn, 6:09 pm, Kesa, 9:54 pm, and Serafina, 8:54 pm. I like that because I’m not a night person, so I was hoping that labor wouldn’t start in the evening or middle of the night this time either.

Friday, September 9th, I woke up sad and grumpy that today wasn’t going to be the day. I went for my morning walk with Autumn as usual and decided that instead of waiting for labor, that I would bake and make a pot of soup to have on hand in case he decided to come on the weekend.

After breakfast, I made a pot of Black Bean and Barley Vegetable Soup, doubled two cookie recipes, and doubled a recipe for coconut apricot cookie granola to freeze and keep stocked. All the while baking and even in the morning on the walk I felt crampy, but since there were no signs of baby just two days ago and no loss of the mucous plug or water breaking, I didn’t think it could be the start of anything, although I was hoping!

After all the baking and cooking, I went for a 20 minute nap. I had a few contractions, starting at 1:30 pm. There were more during lunch and after. Craig woke up at 3:00 pm and I told him I was feeling pains, but wasn’t sure. We decided to go out for a family walk from 4:00-5:00 pm. During the walk the contractions continued and started to become closer together and more intense. We went to the store in the van and I had two more, closer and stronger yet. Got home and getting out of the van the contraction had me stop and wait for the pain to go away.

Craig thought it was a good idea to call my parents to come over and start heading to the birth center since it was a two-hour drive. We left at 5:30 pm and got there at 7:30 pm. I even brought towels with me and reviewed on my phone how to deliver my baby in case I were to have him in the van! On the drive the contractions were now 3 and then 2 minutes apart. Things progressed pretty quickly this time around!

When my midwife arrived to check me at 7:45 pm, I was 7 cms dilated. I gave her two thumbs up and was happy to hear that it was that close and that I was actually in real labor (even in the van I had my doubts). Imagine if we had waited at home even 30 mins more! I might have not made it through the birth center doors!

The birthing tub was run for me and I got in at 8:00 pm. I labored there until 8:45 pm when it was then ready to push. It was so intense this time around during his crowning that at some points I felt like I just couldn’t do it. At 8:52 pm, our first son, Pheonyx Zadrien Pidruchny, was born. He weighed in at 9 lbs, 2 oz. A big boy!! All natural and fast too! 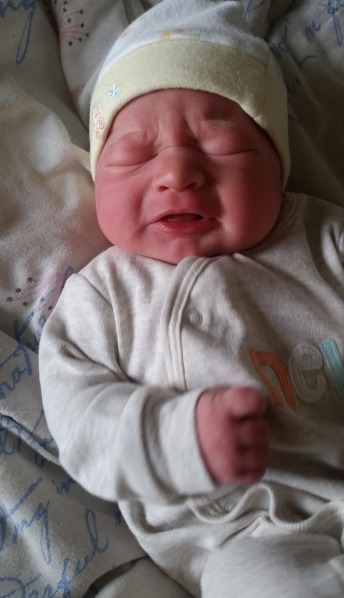 When he was pulled out to be placed on me his cord snapped! (So much for delayed cord clamping!) Apparently he had a really short cord, just over a foot long, and it is pretty rare that that happens, but it does happen. There was a moment of panic in the room until he breathed and cried and I knew he was ok.

When he first came out and I held him I thought that he was so tiny, maybe 6 or 7 lbs, while everyone was saying what a big boy he was. I never expected that he would be a nine-pounder! Autumn was 9 lbs 6 oz, Kesa was 8 lbs 15.5 oz, and Serafina was 8 lbs exactly. All of my babies have gotten smaller and the labors easier, but with him that wasn’t the case. He was big and although the labor was pretty easy, the last 10 minutes were pretty difficult! 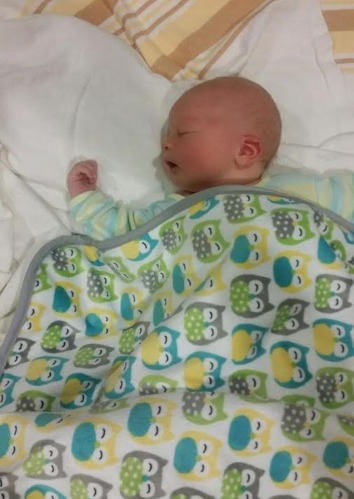 Filling out his birth registration.

He is here and he is the love of my life! He nurses like a champ and I adore his sweet cuddles so much! I love my little man and his sisters love him to pieces as well! Kesa is always picking what outfits and diapers he should wear and Autumn and Kesa are both good at watching him if I need to run to the bathroom or grab something to eat. The last 24 hours he is also starting to open his eyes and look around more. 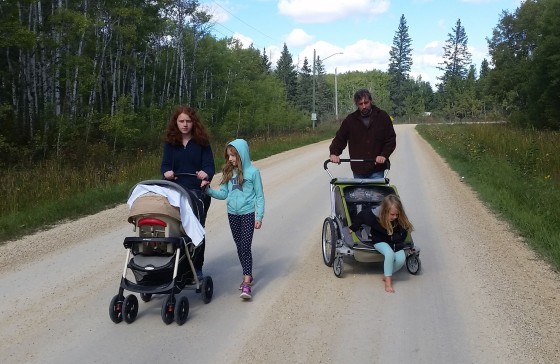 I love my big family of 6, and I feel so blessed to be this little man’s momma and the momma of my clan.